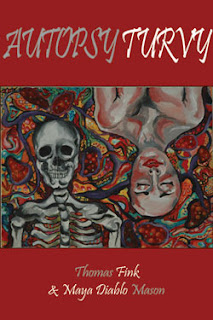 Meritage Press is delighted to announce the release of AUTOPSY TURVY, a collaborative book of poems by father-daughter Thomas Fink and Maya Diablo Mason. A book of "utterly wishful miraculously wistful costumed poems" (Tan Lin), AUTOPSY TURVY gathers terse, springy, psychologically intense eleven-line lyrics and hay(na)ku-based pieces, a 15-poem series called "Bee" that spells out the tangles of family and finances, a surreal poetic play entitled "Invisible Surgeon," and much else. According to Denise Duhamel, Fink and Mason's "poetry. . . goes to the brink, peering off the cliff, before they pull one another back to safety."

Thomas Fink’s fifth book of poetry, Clarity and Other Poems, was published by Marsh Hawk Press in Spring, 2008. His chapbooks, Generic Whistle-Stop (Portable Press at YoYo Labs) and Yinglish Strophes 1-19 (Truck Books) appeared in 2009. A Different Sense of Power (Fairleigh Dickinson UP, 2001) is his most recent book of criticism, and in 2007, he and Joseph Lease co-edited “Burning Interiors”: David Shapiro’s Poetry and Poetics. His work is included in The Best American Poetry 2007 (Scribner’s). Fink’s paintings hang in various collections.

Some ADVANCE WORDS for AUTOPSY TURVY:

In AUTOPSY TURVY, Thomas Fink and Maya Diablo Mason (a father and daughter collaborative team) give us poetry that goes to the brink, peering off the cliff, before they pull one another back to safety. These poems—about death and dying, inheritance (monetarily and otherwise), and family—put the “Pan” in deadpan. AUTOPSY TURVY is as magical and mysterious as the Greek god of nature or the moon of Saturn. This poetry pair is funny, smart, and profound.
--Denise Duhamel


These utterly wishful miraculously wistful costumed poems are made up--of messages, notes, offhand remarks, smiles, half anecdotes, beautiful smirks, let-downs, put-downs, winks, disgust, jokes and riddles—that pass between child and parent, father and daughter, and everything said between a laugh a yawn a cry. “Forgot my ocean.” I cried. I laughed. I read “I have something sleepy to tell you.” And then I read “Some of those flowers could crack abstruse dance codes.” And then: “Girls get their food from tulips.”
--Tan Lin


AUTOPSY TURVY is the record of a series of remarkable poetic jam sessions between (father) Thomas Fink and (daughter) Maya Diablo Mason. Tom and Maya work together in the way that family members do: finishing one another's sentences. And they finish them to a high sheen.
--Tom Beckett