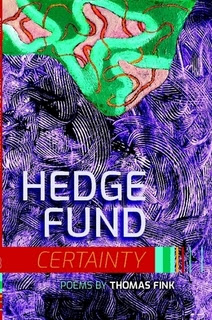 You are invited to order the book through Meritage Press' Lulu Account HERE.

Poet Thomas Fink is a landscape artist with words.  And in the same way that landscapes depict disparate objects and spaces in a non-narrative relationship to each other, this literary artist’s poems present what feel like chance clusters of words in their seeming unrelatedness, but which are actually meticulously-composed visual abstractions that tickle, jog, and surprise a reader’s attention.  His is an art of erratic suggestion that deftly conveys a sense of the spontaneous free association.
In his world, rational expectations are playfully ambushed and taunted into yielding and letting go.
By turns, we are confronted with possibilities of sense and non-sense that refresh and liberate us from the shackles of meaning.
One might experience this as a shower of delight that washes away a staid resignation to what is or seems in favor of a tingling irrational exuberance.
In short, the orderly requirements of cognition are neutralized and surpassed in a rare adventure of the unexpected.
So, be cautioned and prepared:  to read and engage with these poems is to take a joyous “magical mystery tour” into an uncharted dimension of experience – a sort of enriching “acid-induced journey” without any disabling after-effects.

Posted by EILEEN at 2:14 PM No comments: