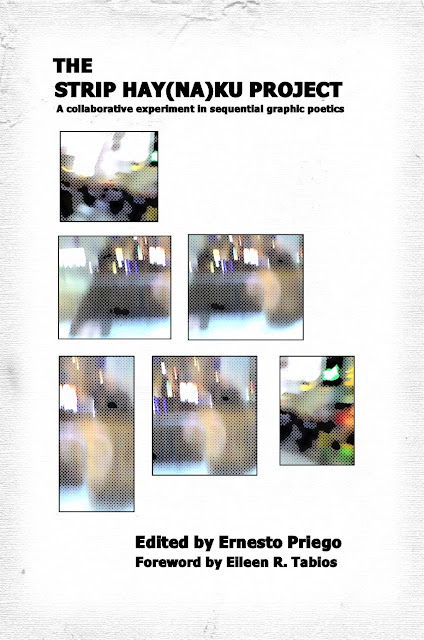 "Hay naku" is a common Filipino expression covering a variety of contexts—like the word "Oh." The "hay(na)ku" is a 21st century poetic form invented by Eileen R. Tabios. It is a six-word tercet with the first line being one word, the second line being two words, and the third line being three words. Poets around the world have used the form and have created text and visual variations of the form, including the “chained hay(na)ku” which strings together more than one tercet as well as the reverse hay(na)ku where the word count is reversed. Ernesto Priego started co-creating "strip hay(na)ku" poems in 2008, inspired by examples of Slovenian "strip haiku".

About The Strip Hay(na)ku Project:
"Hay(na)ku, a 21st century fixed verse form, has inherited haiku-sensibility (with its caesuras or paradigm shifts) and added to it a new kind of game, with 1, 2, and 3 words, perfect for the special needs of alphabetical writings. The inventive collaborators of this book successfully transplanted hay(na)ku – not only its basic form but its spirit as well – into the field of visual writing, and what we get is new and exciting. The book contains real comic strips but almost as soon as I started reading/watching the panels I had the strong impression that instead of the usual multitude of voices, speakers, actors etc. we have only two "heroes", so to speak, inside and outside, and even they are not so different, to say the least. There is no comic strip without a story, and this time we are told and shown (but the texts and images don’t explain each other, their connection is inspiringly dissociative), how those heroes or perspectives keep changing places. It happens gently, almost invisibly…"
-Márton Koppány

BIOS
Ernesto Priego is a lecturer at the Centre for Human-Computer Interaction Design, City, University of London. He is the founder and editor in chief of The Comics Grid: Journal of Comics Scholarship. He co-curated, with Ivy Alvarez, John Bloomberg-Rissman and Eileen R. Tabios, The Chained Hay(na)ku Project (Meritage Press and xPress(ed) 2010). He is also the author of Not Even Dogs. Hay(na)ku Poems (Meritage Press, 2006); the amazing adventures of Gravity & Grace (Otoliths 2008); The Present Day. The Mañana Poems (Leafe Press 2010); Ahí donde no estás. De nombres propios y otros fantasmas (Instituto Veracruzano de Cultura 2013); and, with Simon Grennan and Peter Wilkins, the non-fiction comic Parables of Care. Creative Responses to Dementia Care (City, University of London, University of Chester and Douglas College, 2017). He posts things online whenever he is able to at his blog, epriego.blog, and on Twitter @ernestopriego.

Eileen R. Tabios has released over 50 collections of poetry, fiction, essays, and experimental biographies from publishers in nine countries and cyberspace. Her books include a form-based "Selected Poems" series: The In(ter)vention of the Hay(na)ku: Selected Tercets 1996-2019; THE GREAT AMERICAN NOVEL: Selected Visual Poetry (2001-2009); INVENT(ST)ORY: Selected Catalog Poems & new 1996-2015, and THE THORN ROSARY: Selected Prose Poems and New 1998-2010. Recent poetry collections include HIRAETH: Tercets From the Last Archipelago, MURDER DEATH RESURRECTION: A Poetry Generator, TANKA: Vol. 1, and ONE TWO THREE: Selected Hay(na)ku Poems which is a bilingual English-Spanish edition with translator Rebeka Lembo. Forthcoming is WITNESS IN A CONVEX MIRROR which will inaugurate Tinfish Press’s ”Pacific response to John Ashbery.” She also invented the poetry form “hay(na)ku” whose 15-year anniversary in 2018 is celebrated at the San Francisco and Saint Helena Public Libraries. More information about her works is available at http://eileenrtabios.com.