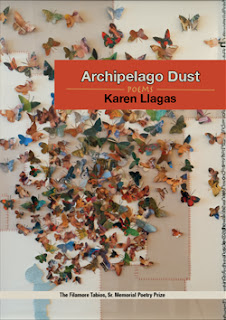 Meritage Press is pleased to announce the release of Archipelago Dust, a first book by Karen Llagas and also the recipient of the second Filamore Tabios, Sr. Memorial Poetry Prize. Also a recipient of a Hedgebrook residency and a Dorothy Sargent Rosenberg Poetry Prize, she holds an MFA from the Warren Wilson Program for Writers and a BA in Economics from Ateneo de Manila. A lecturer on Filipino language and culture and Southeast Asian literature at UC Berkeley, she also co-authors 500 Tagalog Verbs (forthcoming from Tuttle) and works as Tagalog interpreter and translator.

Advance words for Archipelago Dust include:

Nostalgia, according to Hollis Frampton, should be translated as the "wounds of returning." Llagas's book explores the wounds—but also pleasures—of returning to a rich mixture of sensation and dialect, whether in Manila or San Francisco, news or myth. At one point, her speaker moves to "praise what refuses to be translated." But then, because wounds and words are not enough, she continues: "Praise, too, the thorax/and its steady vibrations... the lover's body still/warming my bed, his sex/mercifully relentless."
—Tung-Hui Hu, Mine


Karen Llagas' poems reveal an introspective speaker, one who reflects on the adopted "America" around her with such thoughtfulness and grace. Llagas' poems also deceive in their apparent order but surprise in their leaps. These leaps represent a speaker who longs for connection to all of her lovers, whether being the past, culture, or romantic loves, but ultimately one who cannot fully connect. In the powerful poem "Canvas," the speaker lists the mundane keys with other things that can't ever be reached or neatly filed away: "Keys, sadness, childhood, where do you put them away?"
—Victoria Chang, Circle and Salvinia Molesta


In one of her poems Karen Llagas intones, “Praise what refuses to be translated,” a statement that could serve as the directive which underwrites her poetry’s fierce inquiries. Whether writing about the dissonant intimacies of family life or of romantic attachment, the vivid textures of a homeland or the problematic home that is America, Llagas gives necessary depth to things that our present culture often translates into facile verbal commodities. Llagas’s lyricism gives back a complex and sensuous measure to the world she writes about, in poems that are haunted, tender, and ardent.
—Rick Barot, The Darker Fall and Want