Not Even Dogs by Ernesto Priego 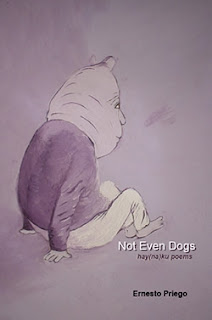 Meritage Press is pleased to announce the release of NOT EVEN DOGS by Mexican poet Ernesto Priego. This book is not only Priego's debut poetry collection but also the first single-author hay(na)ku poetry book.

The hay(na)ku is a "diasporic" poetic form inaugurated on June 12, 2003 by Eileen R. Tabios. The form swiftly became popular and, in 2005, THE FIRST HAY(NA)KU ANTHOLOGY was published featuring 38 poets around the world, including its coeditors Mark Young (New Zealand) and Jean Vengua (United States). That first anthology may be the swiftest anthology release following a poetic form's invention, with a second anthology in the works.


Advance Praise for NOT EVEN DOGS:

[Ernesto Priego] bares & shares himself more than any other contemporary poets I know. Cuts pieces out of himself & then examines them with us. & he has found the perfect vehicle for it, the hay(na)ku, known in Mexico as the jainakú because his use of it has made it part of the local language even though he mainly writes in English. He has grown into it, made it his own, & now it grows with him. The first thing I wrote down in my preparatory notes for this piece was "adopt, adapt, adept". // The hay(na)ku is still a young form, but with Singers such as Ernesto Priego working their magic with it, it will have people listening for a very long time.
--from the Foreword by Mark Young


The weirdly christened, pun-intended brainchild of that Thomas Alva Edison of contemporary poetry, Eileen Tabios, the jainakú (aka hay(na)ku) becomes truly global in NOT EVEN DOGS, and Ernesto Priego may rightfully claim to have elevated it to an art form.
--Eric Gamalinda, author of ZERO GRAVITY and AMIGO WARFARE

I find so many of Ernesto's poems breathtaking, and I've never used that phrase before but it fits. I breathe in deep for the "AH!" awe of awesome poetry when you catch it in the act-of becoming, becoming a part of this person, here, right now, you, in the reading.
--Lorna Dee Cervantes, author of DRIVE: THE FIRST QUARTET


"These are delicate, spare lyrics of love, loss, and introspection."
-K. Silem Mohammad, author of A THOUSAND DEVILS and DEER HEAD NATION


Ernesto Priego's poems magnify minutiae. When each poem closes in on dust, colour, emotions, flesh-its aches and pains, every word must tremble on the rim of falling. I observe how"miss" is loaded: abstain, avoid, fail to hit its mark, yearn....
--Ivy Álvarez, author of MORTAL

ABOUT THE AUTHOR:
Born in Mexico City, Ernesto Priego is an essayist, teacher and translator. He is interested in everything having to do with poetry, graphic narratives and pop music.


DISTRIBUTION:
NOT EVEN DOGS is available online through Lulu.com as well as from Meritage Press (contact MeritagePress@aol.com)