PINOY POETICS: A Collection of Autobiographical and Critical Essays on Filipino and Filipino American Poetics, Edited by Nick Carbo 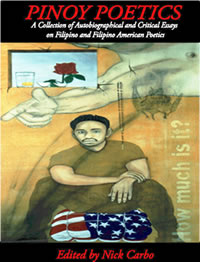 PINOY POETICS was developed by Eileen Tabios to be the first international poetics anthology of Filipino English-language poets. Poet, critic, editor and teacher Nick Carbo subsequently agreed to edit this unique and groundbreaking collection of autobiographical essays by approximately 40 Filipino poets. The poets discuss the elements inspiring and influencing their poems as well as feature sample poems that illustrate their thoughts. Aptly reflecting the diversity of this community which has not yet received much attention in the literary world, the featured Filipino poets' concerns are wide-ranging and encompass Taoism, hip-hop, Kali (a Filipino martial arts form), ekphrasis, the legacy of Jose Garcia Villa, Bay Area Pil-Am movement, poems inspired by the carabao (water buffalo), colonialism and postcolonialism, homosexuality, lesbianism, wars such as what occured or is occuring in Vietnam, the Gulf and Afghanistan, the Martial Law years in the Philippines, the relationship between poems and plays, feminism, a resonant tale over ice cream and -- of course -- poetic forms.

This project -- consciously designed to help obviate the historical silencing of voices from the Filipino community -- is scheduled for release in 2004. The book is appropriate -- and necessary -- as an educational text for various disciplines including but not limited to poetry, creative writing, multicultural studies, Filipino studies and literature, Asian American literature, humanities, the social sciences and history. A comprehensive bibliography of poetry publications by Filipino authors will be included.