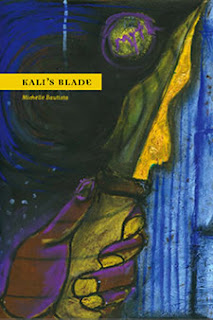 Meritage Press is pleased to announce Michelle Bautista's inaugural poetry collection, Kali's Blade. This unique collection is a mixture of poetry, prose, and collaborations that brings martial arts to the page, creating a tapestry that attempts to capture this elusive spirit known as Kali (a martial arts form). Kali's Blade is like walking the edge of a knife between reality and myth, strength and frailty, the physical being and the written body. As Bautista writes in, "How to Battle a Wind Goddess," the only real way to win is to inhale her, for "where she became my flesh / I became the wind goddess."

Gura Michelle Bautista is a 4th degree black belt in the Kamatuuran school of Kali under the direction of Tuhan Joseph T. Oliva Arriola. She teaches Kali in Oakland, CA. She is a SF Bay Area poet and performer, having worked with Kearney Street Workshop, Bindlestiff Studios, Asian American Theater Company, KulArts, and Teatro Ng Tanan. She has been published in Going Home To A Landscape, Babaylan, maganda magazine, Eros Pinoy, Asian Pacific American Journal, TMP Irregular and MiPoesias Magazine.