Museum of Absences by Luis Francia 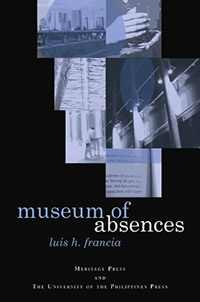 Meritage Press is pleased to announce the publication of a new poetry collection by Luis H. Francia, Museum of Absences, copublished with the University of the Philippines Press and released in summer 2004.

Museum of Absences grew out of Francia's insistent sense of the void that haunts our contemporary lives, whether because of politics, faith, history, or personal circumstance. With such themes as loss, transcendent love, and revelation, the book's three sections introduce us to a wide array of personae, from a Filipino old-timer looking back on a life of invisibility, to Cinderella in middle age, from a grandson communing with his deceased grandparents to a New Yorker responding to the horror of 9/11. However different the masks, the poet's voice remains consistently lyrical, with language heightened by irony, metaphor, and musicality. This collection is marked by poetic inventiveness--in a disaffected age, surely one of our most valuable resources.

In Museum of Absences we see a poet writing at the height of his virile, vatic powers. Luis H. Francia's themes of love, loss, and redemption weave through the collection with the expert hand of a Stéphane Mallarmé or a Federico Fellini. His uniquely New York poetic responses to the tragedy of 9/11 are some of the finest I have come across. This is a book you will return to again and again.
--Nick Carbo, author of Andalusian Dawn

In Luis H. Francia's Museum of Absences, the halls and corridors are lined with poems that assert their presence and history against indifference, erasure, and oblivion. These are poems that bristle with kinetic energy: They step out of their frames, ultimately refusing the cold elegance of a display case in order to run amok in the streets, start fires, stage rebellions, sing and fuck and love even in the shadow of apocalypse. Despite the variety in this collection, Francia's subject remains the Filipino:"The beauty of our darkness//... Our delicate bones, our/ Millennial colonial contradictions/ The humanity of the subjugated//...the thoughts of a brown man/ ...in the season of aridity." He gathers up the different fragments of our selves and treats them as reliquaries, uncovering their grammar and meaning, all the while offering the startling perspectives of "an aerialist of uncommon grace."
--Luisa Igloria, author of In the Garden of Three Islands and Encanto


Luis H. Francia is the author of the semiautobiographical Eye of the Fish: A Personal Archipelago, honored with the 2002 PEN Center Open Book and the 2002 Asian American Writers literary awards. A winner of the Palanca Poetry Prize, one of the Philippines’ most prestigious literary honors, Francia has two earlier books of poems--Her Beauty Likes Me Well (with David Friedman) and The Arctic Archipelago and Other Poems, as well as a collection of reviews and essays, Memories of Overdevelopment. He edited Brown River, White Ocean: A Twentieth Century Anthology of Philippine Literature in English; as well as Flippin’: Filipinos on America, with Eric Gamalinda as coeditor; and, along with Angel Velasco Shaw, Vestiges of War: The Philippine-American War and the Aftermath of an Imperial Dream, 1899-1999. He writes,in New York, for The Village Voice and The Nation, and, in Manila, for The Sunday Inquirer Magazine. A tale of two cities--Manila and New York--Francia teaches at New York University.