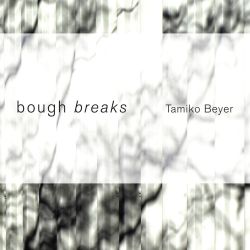 Meritage Press is pleased to announce the release of bough breaks, a first chapbook by Tamiko Beyer, a poet, writer, and educator based in Brooklyn. She is the poetry editor of Drunken Boat and leads creative writing workshop for at-risk youth and other community groups. A Kundiman Fellow, she is also a founding member of Agent 409: a queer writing collective in New York City.

The poetic sequence bough breaks sets out to interrogate queer motherhood, implications of gender, and the politics of adoption. Traveling across terrains (New York, Bangkok, Honolulu, Tokyo) and time (from the speaker’s childhood to an imagined future that holds or does not hold an adopted child) the poem teases apart the idea of conception. Queer in content and form, this fiercely feminist yet tenderly personal poem takes on the lullaby-lyric of parenthood to lay claim, surprise, and engage.

Lullabies are strange things. They console and terrify with a single melodic truth: the beauty of life is the mystery of death. Tamiko Beyer understands the uncanny spirit of the lullaby. She wields her lyric power deftly, taking words like “being,” “parent,” and “poet,” and splintering their meaning. She skillfully breaks and resets form, creating poems that are terse, tender and ultimately, enduring.
—Tisa Bryant

In a trance-driven lineage of serious thinkers which include the likes of Myung Mi Kim, Jessica Grim and Bruna Mori, Tamiko Beyer does not separate the experience of a gendered body from genres of thought. This writing lies down between poetry and theory and makes a bed there, a bed of textured experience and fabulous rhythms.
—Kazim Ali


Our poems may be our babies, as a friend said to Tamiko Beyer, but the desire for a baby can be a very complicated poem. Beyer charts her desire for a child through lenses of memory, what ifs, hormones, possible adoptions, and unsimple yearning. Where “neither gender nor sex [is] fixed,” a baby must be found rather than conceived in the standard way. Beyer's chapbook adds to a growing body of poetry about non-traditional families. It is a book about bodies, their transformations and their costs (“...more money if... // a) special needs b) forgiven c) teenager”). But it also a book about family values, real ones.
—Susan M. Schultz