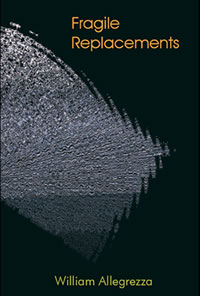 Meritage Press is delighted to announce the release of FRAGILE REPLACEMENTS, William Allegrezza's long-awaited poetry collection. FRAGILE REPLACEMENTS explores the way we live through language, experiencing births, deaths, and rebirths through it, but the book also examines how our language is filled, controlled, and crafted by our societies. Two long poems surround and provide context for reading shorter lyrics in the middle section.


ABOUT THE AUTHOR:
William Allegrezza teaches and writes from his base in Chicago. His poems, articles and reviews have been published in several countries including the U.S., Holland, the Czech Republic and Australia, as well as in several online journals. His chapbooks, e-books and books include Lingo, The Vicious Bunny Translations, Covering Over, Temporal Nomads, Ladders in July, Ishmael Among the Bushes, and In The Weaver's Valley. He is the editor of Moria Poetry (moriapoetry.com), a journal dedicated to experimental poetry and poetics, and the editor-in-chief of Cracked Slab Books (crackedslabbooks.com).

Allegrezza's poetic canvas-of-choice is the lyric, and his lyrical investigations frequently appear to evolve or grow. . . from an imagination fueled by found language fragments and theory-singed excesses. This particular poet's capacity to create resonant, "deep" images is extraordinary.
--Clayton Couch

There is something about the flow in Allegrezza's poems that I quite like, the way they simply move one step at a time down the page almost intuitively. Really, it's the leaps between lines that impress; almost ghazal-like down the page, jumping from line to line to line in seeming disconnect.
--rob mclennan