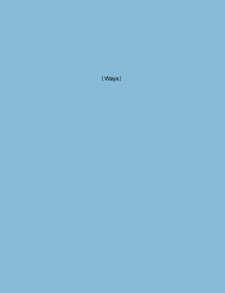 Meritage Press is pleased to announce the release of [Ways], a co-publication with Artsonje Center (Seoul) of a collaboration between poet Barry Schwabsky and artist Hong Seung-Hye.

[Ways] is Barry Schwabsky's first publication since his startling debut collection Opera: Poems 1981-2002, which Publishers Weekly praised as an "intensely wrought, luminously gripping book" distinguished by what Bookforum called "dazzling modulations of phrase and tone." Schwabsky's contribution to the volume is "ways to make a man feel like an unemployed hearse driver who had had a little trouble with the higher powers" (a title quoted from Marguerite Young's book on Eugene V, Debs), a curiously structured sequence of fifteen non-sonnets, a difficult meditation on difficult love. It is here presented as part of a collaboration with Korean artist Hong Seung-Hye, whose work appears not as a form of illustration but rather a deceptively simple, discreet, and elegant graphic complement to -- and extension of -- the poet's words.


"Barry Schwabsky has put together a new form. I'm calling it the disappearing sonnet comb. Were this comb in the hands of another poet, the poem might not disappear so completely. But the tooth of Schwabsky's poem, the line running through each reiteration, gathering and pulling repeated words to itself in the reverse of static cling, is there to remind us that objects in the poem, or the poem itself, may fail to appear. This page, left intentionally blank, says the poem, every time. The library is burned. The kisses are misdirected. Haven't you ever / pressed the right key into the wrong / door in the right hotel the wrong night? Of course we have. And like the poet, we know it's unlikely that anything can be said at all. And yet we keep pressing our key to the door. We keep breathing. We keep breathing. We keep breathing."

Barry Schwabsky was born in Paterson, New Jersey, and now lives in London. Aside from his poems, previously published in Opera: Poems 1981-2002 (Meritage Press) as well as in the chapbook Fate/Seen in the Dark (Burning Deck), he is the author of many works of art criticism, including The Widening Circle: Consequences of Modernism in Contemporary Art (Cambridge University Press) and contributions to the volumes Vitamin P: New Perspectives in Painting (Phaidon Press), Jessica Stockholder (Phaidon Press), and Gillian Wearing: Mass Observation (Merrill Publishers). He writes regularly for Artforum and other publications and has taught at New York University, Yale University, and Goldsmiths College, University of London, among others.

Hong Seung-Hye, a professor at the Department of Fine Arts, Seoul National University of Technology, has seen her works exhibited internationally, with recent solo shows at Kukje Gallery (Seoul) and Gallery Rabouan Moussion (Paris). Her participation in [Ways] reflects her thoughts on "Organic Geometry" which she envisions as " being soft, natural, and lyrical, a concept contradictory to 'geometry'." Her pursuance of "coexistence of these paradoxical elements" derived from "how the geometrical forms come into being as breeding organism made up of the pixel, the basic unit of computers, and the architectural environment constructed with such forms." She explains, "I have been interested in architectural space as a pure form, particularly its artificial and geometrical circumstances which surround modern civilization. I want my work to breathe life into this geometrical space, embracing its desolating dryness, which has inevitably become our second nature."

[Ways] is available from Meritage Press.