Dérive by Bruna Mori, with paintings by Matthew Kinney 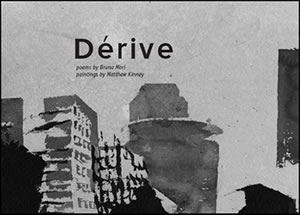 Meritage Press is delighted to announce the release of Bruna Mori's long-awaited first poetry collection, Dérive, which also presents reproductions of paintings by New York-based artist Matthew Kinney. Drawn by the New York cityscape and encounters found there, physical trajectories are mapped in words and sumi-ink. Poems that depict an ever-shifting subjectivity within the urban sphere are interspersed with paintings of architectures dis/assembling.

From Second Avenue to 242nd Street, spanning mahjongg parlors and halfway houses, "Bruna Mori creates a lyrical alchemy of the debris and mythology of New Amsterdam (Brenda Coultas)." "Mori rides the New York City subway to its terminus, and in so doing reminds us that those oft forgotten souls who inhabit urban outreaches are adamant bridges between their old world and new (Martine Bellen)."

The book honors (and strays from) the Situationist theory of the dérive, or "drift"--where one or more persons during a certain period let themselves be attracted to the terrain, détourning one's steps on noncapitalized time. Through drift, Mori "found" collaborator Matthew Kinney painting the skyline in sumi-ink on a torn-edged canvas--a carryover from his skate-punk days when he regularly made impromptu washes on cardboard kept in his backpack. Not long after, they decided to combine their work.

"Mori is not only a cogent observer of life and its environs but a magnanimous participant who shines a light on the profound beauty of no-name pizza parlors and sweaty flesh that bears green tattoos of the heart."
—Martine Bellen

"Dérive is an animated guidebook to the boroughs of my city and should be required reading for travelers and residents alike."
—Brenda Coultas

"Much to admire. In the range of experiences detailed and the ever-shifting vantage point, the city and its inhabitants emerge as vastly various and yet inextricably bound to one another."
—lê thi diem thúy

"A deft poetic journey through the fissures and ironies of city life."
—Norman M. Klein

Bruna Mori was born in Japan and has lived primarily in the United States--mostly in New York, and Louisiana and California. Tergiversation (Ahadada Books, 2006) and The Approximations (2nd Avenue Poetry, 2006) are her first chapbooks, and Dérive is her first book. A writer and editor, she teaches at Art Center College of Design and the Southern California Institute of Architecture. Her BA and MFA degrees were completed at the University of California, San Diego and Milton Avery Graduate School of the Arts at Bard College.

Matthew Kinney was born in Georgetown, Massachusetts. A visual artist with an emphasis on painting and sculpture, he presently has a studio space at Spire Studios in Beacon, New York; also an advocate of sustainable agriculture, he works at Windfall Farms in Montgomery. He attended Pratt Institute in Brooklyn and The School of the Museum of Fine Arts, Boston.