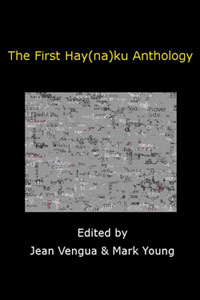 Poetry. Multicultural Studies. The "hay(na)ku" is a poetic form invented by Eileen Tabios, as inspired by Richard Brautigan, Jack Kerouac, and Tabios' meditations on the Filipino transcolonial and diasporic experience. The form is deceptively simple: a tercet comprised of one-, two- and three-word lines. Many poets also created variations from the basic form, attesting to its paradoxical suppleness despite its minimalist orientation. Inaugurated on June 12, 2003 (Philippine Independence Day), the form swiftly became popular and since has been used by poets all over the world -- including the anthology's 38 poets and editors Jean Vengua (U.S.) and Mark Young (Australia).

More information is also available at the Hay(na)ku Blog.

THOUGHTS ON THE HAY(NA)KU FROM SOME OF THE ANTHOLOGY'S CONTRIBUTORS:

It is a beautiful glass container for holding the present moment: spare and elegant, it also has an incredible capacity for breadth. The hay(na)ku form is a wonderful and witty evolution that triggers inventiveness in those who use it.
--Ivy Alvarez

Hay(na)ku is such a seductive form that I've found myself rather obsessively viewing the world through its six-word frame. It's become a problem for me. The problem isn't the form. The problem is my obsessiveness.
--Tom Beckett

I had never before heard of the hay(na)ku form. So what first attracted me to this project was experimenting with something new. While trying to write some poems in the form, I noticed that hay(na)ku reads with a breathability that other forms lack -- including the tightly coiled haiku -- but it also has its pitfalls. How exactly do you go about codifying experience into such a strict pulse? How do you give life to a subject without short-changing it? There's a disjunction -- the form is hard to write, but easy to read, quite musical. It's a fascinating puzzle. What's left out means as much as what stays in. There are little shadows that follow the poems to their ends, scattering stones in the shallows of syntax. Reading one poem, you're hearing a second poem whispered into your ear, soft as a misremembered dream. I wonder how deep these caverns go, these poems seem to say. Better bring a light.
--Michael Chmielecki

We are pattern-seekers and form-makers: we cannot escape form. Even a depiction of chaos will be, in some fundamental way, formal. Indeed, chaos is simply the unfiltered and the uncategorized. As soon as I call this bit "this," and that bit "that," I have performed an act of creation. We cannot choose to be formal; we can only choose how heavily we lean into it. Seeking patterns and making forms is simply our minds in the work of comprehension. Cognition is a winnowing, a series of choices that constrain. But constraints do not limit us; they free us. We sit down to write a poem: where to start, and where to go from there? Instead of all the cosmos, an endless wordhoard to intimidate and overwhelm us, we merely need something that rhymes with "now", or three more syllables, or only six words.

I have been attracted to the Hay(na)ku form recently because the constraint (three lines of six words: 1-2-3 or 3-2-1) sits so lightly on the composition process. I may have half-formed ideas, or notes, or single words lying around, and no other place to put them. Thinking of five more words to go with these fugitives, or reworking a phrase to bring it down to the count, is a playful and surprisingly friendly way of working. It's almost like not working at all. And yet, like all miniaturist forms, it is challenging in a way that long, discursive works are not. As Pascal quipped, "I would have written a shorter letter, but I didn't have time."
--Nicholas Downing

Finding a new form to play with is like putting on pajamas when they are fresh out of the dryer.
--Jilly Dybka

I began writing hay(na)kus because they were the new, fun thing to do. I soon found that this form was more than a trend; it functioned to build community amongst writers who may not have previously had common ground on which to converse. I find this form accessible in terms of its simplicity, its playfulness, and because hay(na)kus are (deceptively) easy to dash off. This being said, I also find that hay(na)kus are difficult to get "right." With such limited space, the hay(na)ku forces you to value (and evaluate) every word. This form also asks you to question or observe the appearance of the poem on the page. What are the implications of beginning with a single word? What happens when you flip the form and the poem whittles itself down from three words on a line to a single word as the last line? I find the drastic differentiation of the line length to be an important component of this form. There would be something unsatisfying, for me, about writing in 2/2/2. Part of the force of the form is the (surprisingly) dramatic difference between the isolation of a single word on a line contrasted by a slightly longer arrangements of words.
--Monica Fauble

I appreciate the hay(na)ku's encouragement of compression, its subtly expansive quality, and the gentle subversiveness of its Filipina-American origins.
--Thomas Fink

i like new forms & try any i hear about. hay(na)ku is interesting both for its terseness & its being a word-count form.
--Michael Helsem

Every word counts. That's hard to resist in The Age of Logorrhea.

Lines shaped by word count rather than syllable, engendering more rhythmic variety among poems and within the poem itself.

Poems start small, grow taller, taller, then hunkerdown, dip, curtsy, until they build toward tall at the end. I read the sea there, gentle tides. (I'm so damned land-locked right now, I read the sea just about everywhere.)

They often arrive on my tongue before I can even locate pen or paper.

And if you've had the chance to read some of the poems found above, the form's not so rigid that it breeds sameness. Mark Young's hay(na)ku do not read like Joseph Garver's.
--Crag Hill

I have written most of my hay(na)ku from scratch but have also used the form to recast older material (such as 'Wet waiting arms' published in this anthology) - it has a way of revealing. I also see it as a 'thinking' form - emotional as well as intellectual thinking. By allowing a lot of space on the page it keeps things tight and loose. Hay(na)ku creates or pushes certain syntactical structures, potentially disruptive through its arbitrariness. Forms aren't games, or just games - they are ways of paying attention. The 'sound' is also important, the way hay(na)ku can build. My preference is to write hay(na)ku sequences that build on the form. Free but firm.
--Jill Jones

The first poems I ever wrote were Haiku. Spare forms, I think, concentrate the imagination. Having only recently been introduced to the hay(na)ku form, I notice that writing these six word poems/stanzas causes me to pay close attention to speaking patterns--specifically the subtle ways word placement can alter tone.
--Kirsten Kaschock

I tried to write (a note on the hay(na)ku) but bits and pieces about Asian trans-national citizenships and Filipino maids kept invading, so I should probably keep writing my essays.
--Rachael Kendrick

It's a form that travels well.
--Karri Kokko

The hay(na)ku form forces the poet to slow down and consider each word individually, almost as a meditation. Whereas haiku restricts the number of syllables, hay(na)ku frees the poet to perceive each word as a complete unit.
--Tucker Leiberman


Why I love the hay(na)ku: Because of the zip and pop of it. Because of the flame and spark of it. Like snapping a towel at someone you love.
--Aimee Nezhukumatathil

The diasporic nature of the hay(na)ku attracted me from the very beginning because it allowed me to express myself in English without being a native speaker. The apparently simple form is, in practice, very challenging, and allows for a series of singular possibilities. I feel the hay(na)ku is a form that grants a common space for poetic practice in different languages; a way of writing in English without completely obliterating one's "mothertongue". Instead of the conquest and influx that has defined English in relation to other "less powerful" languages, the hay(na)ku is open and flexible, an invitation to share different ways of thought and writing.
--Ernesto Priego

It's a fresh and crispy stanza pattern that lets the sky in while keeping a path. Looks good, sounds good.
--Jay Rosevear

When I think about why I 'like' something, especially a poetry form, headaches start to form (that's why we have critics? for headaches, right?). 'Like,' rarely is a reason to action for me. And that goes for any form including hay(na)ku, which I've tried to come to without definition (by definition would defeat the purpose). hay(ka)nu, for me, is a wonderful example of a form where nothing can be said wonderfully or not wonderfully in six words, letters, numbers, etc. It's "vispo" to me, baby. That's/ syllable word/ line divided dividing. Or, as the pigeon at my window just said, "t/ha/t's."
--harry k. stammer

I find the word-based formal constraint of hay(na)ku (as opposed to a syllable or metrical foot based constraint) leads to poems that are in many ways more natural, and that, in particular, the 1-2-3 structure is a pattern that comes up continually in the course of the daily. Poetry lives and breathes in the daily, and hay(na)ku has the ability to capture profound and delightful pieces that might otherwise be missed.
--Dan Waber

This form represents for--someone who spent much of his life in Japan and "toying" with the haiku format--nothing less than the key to release from my preconceived notions of style and form. Many a time I have been forced to conform to some recipe, only to loose all passion and power to evoke with my words. The hay(na)ku had given me the freedom to return to the origins of poetry in play, play with the form and, by extension, with the words themselves. Finally, I find a pleasure in structure that I never knew existed before--precisely because this form allows me to move, to grow, to transform, and yes!--to transgress my own notions of structuring.
--James A Wren