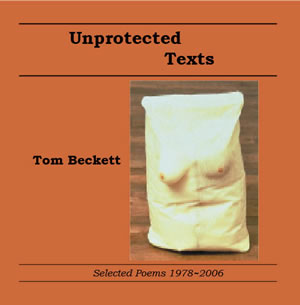 Zombies and Wittgenstein bracket a series of autonomous zones populated by the Book, Harry Partch, 100 Questions, shadows, holograms, the Subject, the author himself, and numerous pronouns. These Unprotected Texts flood the tones of speech wrenched from the bent notes of a life lived looking for a connection to "the conversation" which takes place among musics of meaning. Sex and text are synonymous here. "Is this speech balloon a rubber?"

There is a powerfully osmotic draw to this welcome volume of Selected Poems, spanning nearly thirty years of work and concluding with a stimulating interview of the author by Tom Fink and Crag Hill. That this book is overdue, results in a level of concentration that intensifies the experience of reading. The poetry itself, the intellect and personality that exude from it, reveal a mind and heart that bring to the fore the infinite variety of life in the late 20th and early 21st Centuries. References to composer and musical theorist Harry Partch seem apt, as Beckett's Unprotected Texts reveal intervals in sound, discovering heretofore undiscovered instruments.

There is Beckett as designer who "underpaints." Beckett as builder: "Stanzas are rooms in Italian." Beckett as political and social observer: "Is the president a hologram?" "Do fingerprints have babies?" Beckett as aesthetic investigator: "At some point I turned out to be my method." "Closure affects circumference." Beckett as honest individual/ articulate creator: "It's a boy and it's a girl." "Often I am permitted to do absolutely nothing that I want to do."
--Sheila E. Murphy


For three decades now, Tom Beckett has been writing the most hard-headed, clear-eyed, unsentimental poetry in America. He has the rigor of a master & the mind of a first-rate detective. Long before the internet made it relatively easier for a poet to work from somewhere other than one of the two or three major literary centers, Beckett was writing poems from deep inside Ohio that ring as true -- and as clearly -- now as when they were first written.
--Ron Silliman


BIO:
Well known for editing The Difficulties (1980-1990), a now legendary critical journal, Tom Beckett has long been associated with the Language Poets. His "The Picture Window" (included in this volume) was published in Ron Silliman's landmark anthology In the American Tree. More recently, he has become a popular figure in the world of blogs. Unprotected Texts is comprised of work taken in whole or part from broadsides, chapbooks, journals, online and other publications. It is his first, much anticipated, full-length book. He lives in Kent, Ohio.