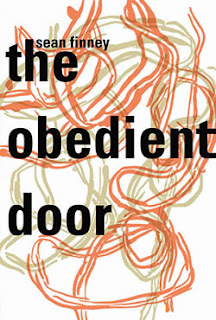 The Obedient Door is an argument for awareness, for seeing and feeling those volumes of our experience not trodden by the shortcuts of social nicety. Finney's first book is also his loneliest, where he speed dates verse in attempts to make lasting combinations. His influences include the New York School, Beckett, Lorca, and Chinese, Japanese, and Islamic poetry. The Obedient Door issues from a desire to know the past and its languages, to find alternatives, new lexicons, other people's boundaries to force words between.

Sean Finney's cheerfully slipshod poems recycle urban moments that don't quite add up to a time, moods that may be part of a relationship, or not, unclassifiable afternoon afterthoughts and changes in temperature: "which song brings stone's rise and water's fall / into the bending of wrists and ankles / and broken corners for dust to change light." These are lines from his poem "What the Leopards Reject." We would be wise to reject the leopards' whims and feast on the scraps he has so eloquently assembled for us, which are in fact those of life itself.

Sean Finney is a poet, journalist and copywriter living in San Francisco. He was born farther west, in Hawaii, but he likes to claim that Rome, where he lived as a teenager, is his spiritual home. This is his first book. His website is www.stfinney.com

Ward Schumaker is a San Francisco based illustrator who has illustrated two books for the acclaimed Yolla Bolly Press: Paris France by Gertrude Stein, and Two Kitchens in Provence by M.F.K. Fisher. His website is www.warddraw.com