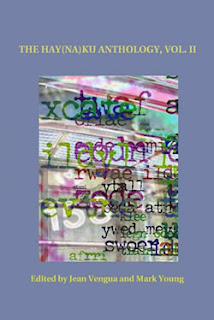 Poetry. Multicultural Studies. The "hay(na)ku" is a poetic form invented by Eileen Tabios, as inspired by Richard Brautigan, Jack Kerouac, and Tabios' meditations on the Filipino transcolonial and diasporic experience. The form is deceptively simple: a tercet comprised of one-, two- and three-word lines. Many poets also created variations from the basic form, attesting to its paradoxical suppleness despite its minimalist orientation.

Since The First Hay(na)ku Anthology's release in 2005, the hay(na)ku has appeared in many literary journals, anthologies and single-author poetry collections worldwide. Artists have created visual hay(na)ku. The form has been written in Spanish, English, French, Finnish, Dutch, Tagalog, and Norwegian. It has been taught in classrooms, and the National Autonomous University of Mexico/Universidad Nacional Autónoma de México (UNAM) features an hay(na)ku webpage in their online journal, Periódico de Poesía. Members of UNAM'S Faculty of Literature and Philosophy/Facultad de Filosofia y Letras are also preparing a full Spanish translation of The First Hay(na)ku Anthology for future release. Reflecting the hay(na)ku's continued popularity, THE HAY(NA)KU ANTHOLOGY, VOL. II is released just three years after the first hay(na)ku anthology. A third anthology is also in the works: The Chained Hay(na)ku which would present hay(na)ku collaborations among three or more writers. We hope readers enjoy this volume, and are encouraged to try writing their own hay(na)ku! For this poetic form also was created as an Invitation to Poetry.

More information about the hay(na)ku poetic form is available at http://haynakupoetry.blogspot.com. The former link identifies the poet-participants, while the latter shares some poets' thoughts on the hay(na)ku's attractiveness. The hay(na)ku has been one of the most popular new poetic forms in recent times; 39 poets participated in the soon-to-be-out-of-print first anthology. In Vol. II, 51 poets from around the world (and representing a multiplicity of poetics) participate.