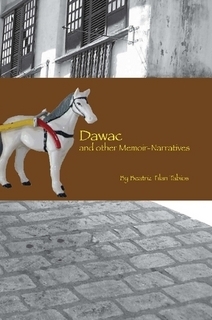 DAWAC and Other Memoir-Narratives by Beatriz Tilan Tabios
ISBN No. 978-0-9826493-5-0
Release Date: Fall-Winter 2012
Available for $12.50 through Meritage Press (MeritagePress@aol.com) and Lulu.com (http://www.lulu.com/shop/beatriz-tilan-tabios/dawac-and-other-memoir-narratives/paperback/product-20386719.html).
Available for $14.50 through Amazon.com


Meritage Press is delighted to release a first book by a first-time author just shy of her 83rd birthday: DAWAC and Other Memoir-Narratives by Beatriz Tilan Tabios.  DAWAC presents Mrs. Tabios' childhood memories of Babaylans (indigenous Filipino healers) as well as surviving the Japanese invasion of the Philippines during World War II.

DAWAC describes many incidents that would be lost today without the book's existence.  They also make history come alive, as only the testimony of someone who lived through the experience (versus a historian's or academic's account) can accomplish.  An example is a section that describes how she and her family ran to the forests to hide whenever the Japanese army approached their town.  As it turned out, it was during those times of hiding when she ended up being introduced to Greek poets, because Homer's Iliad was a "little" book light enough to carry as she fled:


Someone came to the forest to let us know that the [Japanese] enemy had not yet come back from the east. The Soriano family would have gone into the forest, too. So we stayed where we were. I had my little book, the Iliad. I added it to the things in my bag. It was light anyway so it didn’t make a difference even if I had to carry it while we were walking and sometimes running up the hillsides. I started reading it as soon as we sat down in a spot surrounded by low bushes. I was engrossed in the fight between Hector and Achilles. I wanted to know who would win. I was cheering for Hector. My mother told my brothers and me that we could eat some of the brown sugar we had in our bags. My brothers did, but I saved mine in case we would stay there longer.

All of a sudden we heard gun shots, continuous gun shots. It sounded like many guns were fired at the same time. We all dove into a large hole near us. I was on top of those who reached the hole ahead of me. I heard the men whisper, “Machine guns!” We remained crouched for a long time. When the suspense overcame me, I stood up. I saw a Japanese soldier standing on a high ridge south of us. I dropped back to my crouching position. I didn’t tell the others what I saw, but I was expecting to be pierced by a bayonet any minute.

Beatriz Tilan Tabios received her B.A. with English as her major from the Silliman University in Dumaguete, Philippines. She developed her love for poetry as a sixth-grader reading Homer, William Shakespeare, John Keats, Alexander Pope, William Wordsworth and Samuel Coleridge while trying to survive World War II. She would further develop her appreciation for literature as a college student instructed by poet Edith Tiempo, the first woman to receive the title of National Artist for Literature in the Philippines. Critic and fictionist Dr. Edilberto Tiempo, then the head of Silliman University’s English Department, encouraged Mrs. Tabios to continue her study of English and American literature. As a result, Mrs. Tabios wrote her Master of Arts thesis, one of the earliest investigations, regarding Filipino literature, of “(The Use of) Local Color in Short Stories in English.” Later, Mrs. Tabios taught English literature at Dagupan College (now University of Pangasinan) and University of Baguio, before becoming a teacher at Brent School, a boarding school initially built for children from U.S.-American military, missionary and gold-mining families stationed in the Far East.

Advance Words on DAWAC include, from award-winning critic and writer Albert B. Casuga:

I found Beatriz Tilan Tabios’ memoir to be in the classical style of story-telling, worthy of her training under Edilberto and Edith Tiempo. I read “Dawac” and liked the characterization of Apo Kattim, particularly the use of an Igolot extract that was the colloquial dialect in the sanctuaries of Baguling, La Union, where my family evacuated and were sheltered by the bagos (Ilocano-Igolot-Pangasinense mix) during the Japanese mop-up operation before Americans and Filipino guerrillas liberated the Northern provinces and the Cordilleras. I still speak a smattering of the Igolot of Apo Kattim, which I picked up as toddler during our refuge in Baguling’s mountains. Mrs. Tabios’ use of the dialect makes for an authentic character as memorable as those mang-ngagas or herbolarios. I, too, was "cured" by an Apo Anong when I was a little boy—he brushed some leaves all over my fevered body (according to my mother) to trap the "evil spirit" inside an egg; after praying to rid the spell that "punished" me, he threw the egg into some banana grove in my grandmother's orchard (my mother swears to God the egg did not break!). The next day found me running around with my rambunctious cousins as I’d been "cured" of the malady. I learned these from mother's own memoir.
—Albert B. Casuga, author of A Theory of Echoes and Other Poems

I read the 1st part, the title story/memoir. It was great. And I mean great. It was perfect. Oddly enough, in a way, I thought of Clarice Lispector's first novel, Near to the Wild Heart; there are scenes from her childhood in there that are wonderful. So thank you, very very much.
—John Bloomberg-Rissman