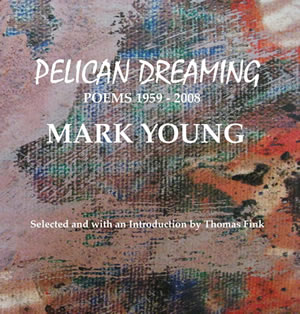 Meritage Press is delighted to announce the release of PELICAN DREAMING: Poems 1959-2008 by Mark Young, Selected and with an Introduction by Thomas Fink.

Mark Young was born in New Zealand, but has lived for more than half his life in Australia. First published in 1959, his work has appeared in a large number of both electronic & print journals, & he has been included in many anthologies. His publications range from the first book on modern New Zealand painting through more than a dozen collections of poetry & his co-editorship with Jean Vengua of two anthologies of hay(na)ku to a speculative novella, the allegrezza ficcione. These days he spends most of his time editing the e-zine Otoliths & nurturing the steadily-increasing catalog of its print publishing arm.

About this project, Mark Young shares:

"My father died when he was 93, &, even then, his death was at least partially due to complications from an amputated leg. Which means there are longevity genes in my family. So it's somewhat ironic that the earliest poem in this selection / collection, "Lizard", written when I was seventeen — 'When one is seventeen, one isn't serious' wrote Rimbaud, in error, but he can be forgiven for he was only fifteen when he wrote the line — stems from feelings of mortality brought on by the teenage angst that beset me at the time.

"As the subtitle of this book indicates — Poems 1959-2008 — those feelings were somewhat premature. But they're still around, since my vision of a neat fifty years of poetry was taken over once again by similar feelings: I wanted the book out there in order to make sure that I was around to see it.

"There is a rough chronological order to the book, based on the order of the books from which the selections were made, but that is for convenience. I have nearly always followed the maxim 'Let the poem shape itself.' So there are streams & themes that overlap across collections, across times, in a variety of concurrent styles. As Thomas Fink writes in his Introduction:

"'If anyone these days is hanging onto a notion of consistent stylistic evolution as aesthetic merit, this volume will do its best to disorient them, as Young's 'many mansions' feature a variety of architectural modes. Could one predict the flights of Betabet from the unified narrative of 'Grafton Bridge,' much less 'Lizard'? 'George W.'s Language Primer' and 'Maxims for Tom Beckett' are both very funny poems, but their humor is achieved in extremely different ways. If someone didn't know who wrote either 'The Baggage Card' or 'The Bride Stripped Bare By Her Bachelors, Even,' would s/he necessarily assume that the same author was responsible for both? Mark Young has the courage to be traditional, imagistically or narratively direct, discrete, serial, surreal, 'experimental,' and 'difficult' in the same season, year, or cluster of years. The reward is ours.'

"Tom's selection was done with total independence. All I did was give him the poems, in a variety of formats — e-books, chapbooks, full collections, blog postings, manuscripts — & let him have his way with me. Or, at least, my output. My gratitude for & pleasure with what he has selected & written to in his Introduction is immense. I have gained insights from his insightfulness. The reward is mine. &, I hope, yours."

A Nota Bene from Tom Beckett:

"I've had the privilege of reading this book in manuscript. It is as fantastically and variously beautiful a book of poetry as one can find. If you only read one selected poems in the coming year, read Pelican Dreaming."