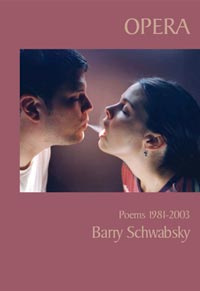 The word "song" resonates over and over and the poems here will often suddenly burst into an intricate, complicated melody. Particularly beautiful are the opening four poems ("Opera") full of refrain and echoes. A distinctive musicality defines this book.
--Juliana Spahr

Meritage Press is pleased to announce the publication of OPERA, the first book-length collection of poems by Barry Schwabsky. Written over a 22-year-period, OPERA presents a compelling, often ecstatic, poetic body of work by a writer who has been more visible over the past two decades as a respected art critic. Mr. Schwabsky was first published as a college undergraduate in POETRY magazine and has since published his work in various journals as well as in two chapbooks, the last being FATE/SEEN IN THE DARK in 1985 through the respected poetry publisher, Burning Deck. Over the last decade, however, he has circulated his poems informally or published them only as limited-edition poet-artist collaborations. OPERA now allows Mr. Schwabsky's poetry to be accessible to the larger public.

Reflecting a primarily private poetic development, Mr. Schwabsky has created a poetry that transcends the schools and categories that sprung up within the poetry world of recent decades. Poet and critic David Shapiro notes about OPERA:

Barry Schwabsky is a wonderful poet and a poet of wonders. His poetry is exactly as strange as the familiar may permit. His work, born of a strange encounter between American poetry and European masters such as Celan and Novalis, always surprises me by its exploratory investigations. He writes one of the most loving poetries today, filled with a sexual myth as strong as anyone's. I am amazed that in one poem he can be as clear as Guston and in another as opaque as Johns. The "beautiful" as defined in this book of poetry is something the skeptical lover can never affix with certainty to the page. That is why each page of Schwabsky, so compressed, so lenient, so observed, keeps to an erotic variety: the experiment, the experience is all. Such poetry makes difficulty its pleasure and can never be explained away any more than love itself. But for all that, this poetry is not old-fashioned but is really wandering in the newest waters of our art.

In addition to working as an art critic, Mr. Schwabsky is a curator, an editor for several leading art magazines including Artforum, and lecturer at Goldsmiths College, University of London. He is the author of several monographs on contemporary artists and The Widening Circle: Consequences of Modernism in Contemporary Art (Cambridge University Press), as well as the critically-praised Introduction to Vitamin P: New Perspectives in Painting (Phaidon). Inevitably, Mr. Schwabsky's activities as an art critic has affected his poems as reflected in an elegant exactitude to his form: in his poems, each word earns its presence.

"As the title suggests, these might be choruses and arias from some lost Venetian music drama of the early 1600s--an allegory of the nature of light and of desire, set on one of those abandoned islands where every imaginable encounter becomes possible--transmuted over the intervening centuries of silence into a software program for a new species of lyrical electronica. 'The world widens / As it flows': on the thread of a rarefied music, Schwabsky strings the immediacies of the half-submerged life of every day as it unfolds in real time: 'And sometimes breathing / is also dancing.' A luminous and quietly unsettling libretto."
--Geoffrey O'Brien

"Imagine poems written by Sir Walter Raleigh after he has read Wittgenstein and Lorine Neidecker, listened to bands whose names weren't in the air but whose one song was on the airwaves, and learned more about contemporary art than anyone thought possible, and you might get a sense of the compactness of these poems, an airy abstract density unlike anyone else's. In the compressed music of these poems Barry Schwabsky registers the distance imagination travels: 'And past the evening's scattered amplitudes/enormous night stretched across power lines.' His diction is infused with subtle tonalities, lightning shifts, and an attentiveness to words as facts and sounds, as vibrant things. Had Raleigh not disappeared while sailing up the Orinoco in his rented canoe, he would have sighed when he read, 'In the kind of light/that buries you, grow older now.'"
--John Yau