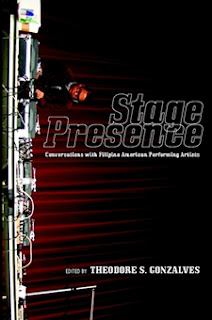 Meritage Press is delighted to announce the release of a historic document: STAGE PRESENCE: CONVERSATIONS WITH FILIPINO AMERICAN PERFORMING ARTISTS, Edited by Theodore S. Gonzalves, a musician and assistant professor of American Studies at the University of Hawai‘i at Manoa.

STAGE PRESENCE is a collection of essays and interviews with Filipino American performing artists. Each of the chapters features critically acclaimed and popular artists in their own right, who have also mentored hundreds of dancers, comedians, theater artists and musicians of all genres. In this rare collection, performers take time off stage to speak candidly about their creative processes, revealing personal frustrations and triumphs, while testifying to the challenges of what it could mean to be an artist of Filipino descent working and living in the United States.

Some ADVANCE WORDS speak to the project's significance:

“Fusing history, culture, jazz, and art, Stage Presence is one big happening jam session featuring ten Filipino American performing artists rapping on their craft, their process, their defiance to be boxed in by the category-obsessed American market, and their hunger and struggles necessary to stay true to their vision, identity, and art.”
— R. Zamora Linmark, author of Rolling the R’s, Prime Time Apparitions and Leche

“This collection of interviews and reflections by many of the leading Filipino American cultural workers demonstrates the range and vitality of Filipino American performing arts – an inspiring and dynamic range of practices encompassing everything from kulintang to head-banging heavy metal, from college PCNs to off-Broadway New York theatre, from the Bayanihan to site-specific performance art. Stage Presence gives us a view rarely available to students, scholars, and audiences: the winding paths through history and identity that led these groundbreaking artists into the spotlight.”
— Karen Shimakawa, author of National Abjection

“When the New York Times looks at Filipinos, it sees only house maids and cooks, copycats, and mimics. But when scholar and artist Theo Gonzalves looks at and talks with his compatriots, he sees stunningly original and creative thinkers who use an eclectic range of forms and methods to make art and perform culture. This book is dizzy and alive with the Filipino soul. Read at your own risk!”
— Karin Aguilar-San Juan, editor of The State of Asian America

Professor Gonzalves has taught college and university courses since 1991 at the following institutions: the University of California (Berkeley, Davis, Irvine & Los Angeles), the California State University (Sacramento, San Francisco & San Jose), Pomona College, and Santa Clara University. Gonzalves also lectured at the Ateneo de Manila University, Quezon City, Philippines, in the department of English. In addition to teaching in the American Studies department at UH Manoa, Gonzalves cross-lists courses with the Ethnic Studies Department; he is also affiliated with the Center for Philippine Studies and the International Cultural Studies Program.

In the field of performing arts, Gonzalves has served as a board member for Bindlestiff Studio, a San Francisco performing arts venue; co-founder of Jeepney Dash Records, an artist-run recording label; keyboardist for the Legendary Bobby Banduria; and musical director for "tongue in A mood" Theatre. Gonzalves' musical work has been featured at concerts such as the Asian American Jazz Festival and theater & music festivals at the Cultural Center of the Philippines. He has also written, produced and performed several scores for independent film projects.

Gonzalves has received a Meet the Composer Award from the Meet the Composer Fund in New York. He was named a Visiting Artist at the American Academy in Rome. In 2005, Gonzalves lectured and researched in the Philippines as a U.S. Fulbright Senior Scholar